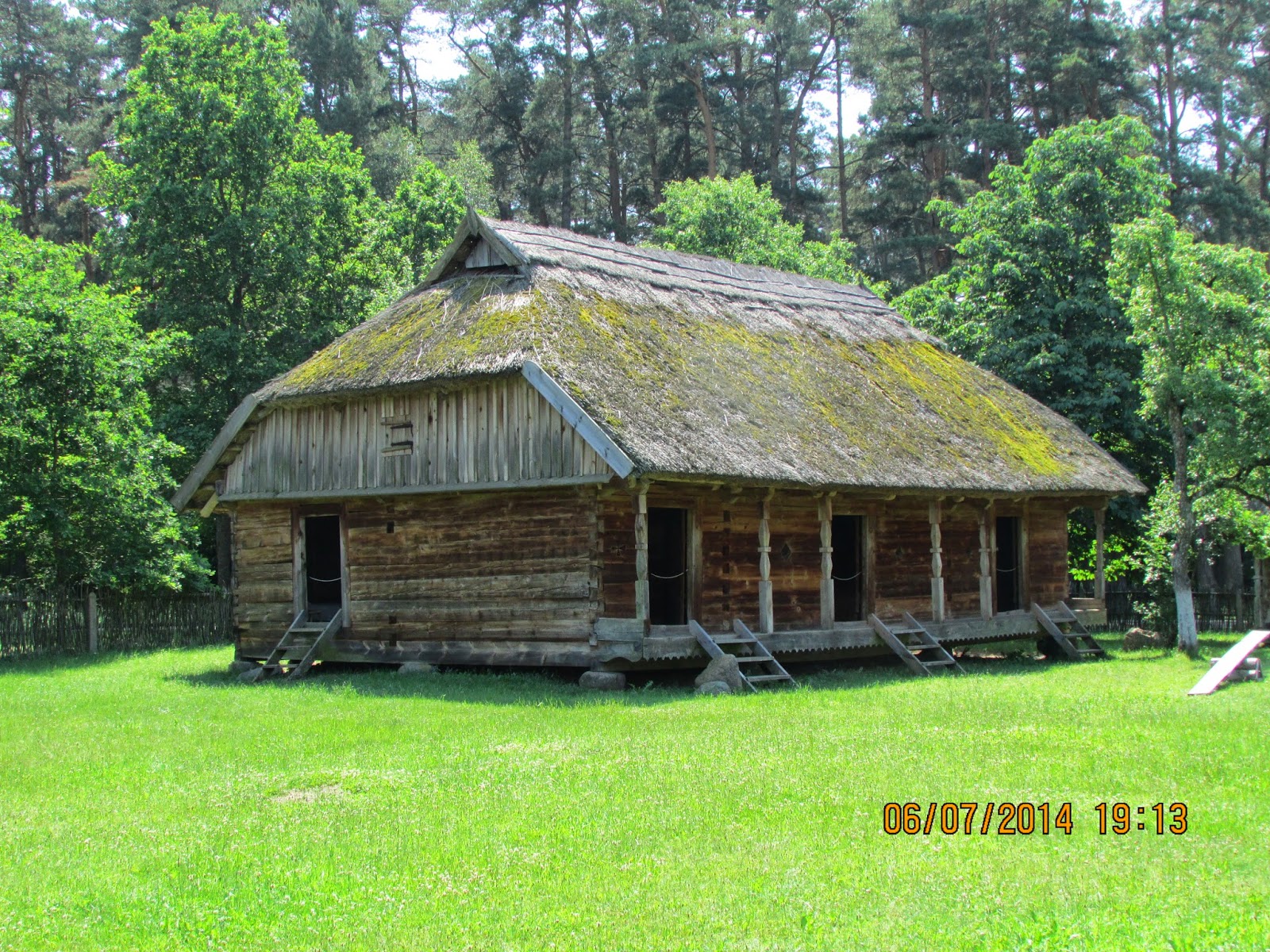 In 1891, a Swede named Artur Hazelius (1833-1901) created an open-air museum and zoo, called Skansen, which was designed to display the cultural distinctiveness of different parts of the country.  The idea caught on in the course of the twentieth century, and the name "Skansen," according to Wikipedia, has come to mean any outdoor collection of historical structures, “particularly in Central and Eastern Europe, but also in the United States, e.g., Old World Wisconsin and Fairplay, Colorado.”


I have visited the original Skansen in Stockholm, and also the one in Helsinki, which is called Seurasaari.  These exhibits are quite interesting, but there would seem to be several grounds on which they are, as a genre, vulnerable to criticism.  One has to do with the integrity of buildings that have been, to one indeterminate extent or another, reconstructed before or after their removal from their original sites, rather than being preserved or restored to some previous condition in situ.  Another criticism centers on the act of removal, which inevitably entails a loss of context.  A third has to do with the illusion of coherence generated by the geographical propinquity of structures that have been moved to an ethnographic museum bent on expressing a regional or chronological rhetoric, or at least what may be considered such by historians or anthropologists.


Lithuania’s Skansen is called Rumšiškes, and its purpose is to express the essence of nineteenth-century Lithuania, which was a decidedly rural place with important regional distinctions.  Rumšiškes is not far from the old (the 1920s and ‘30s) national capital of Kaunas, and it provides a window—albeit an imperfect one—into the somewhat tortured soul of Lithuania.  The site occupied since 1966 by the ethnographic museum is artificial.  There was an original village of Rumšiškes that was submerged by a dam on the Nerunas River built in 1959 to create a huge artificial lake that the locals call the Kaunas Sea, and which serves as Kaunas’s reservoir.

Jane and I got to Rumšiškes by taking a taxi from our old town hotel to Kauno Marios, which is a marina on the lake side of the dam.  There we boarded an only-on-Sundays ferry (see photo below), which docked in Rumšiškes about an hour later.  There we were met by Teodora Morkūnienė, an employee of the museum who also happens to be the mother of my colleague, Aistė Lazauskienė. 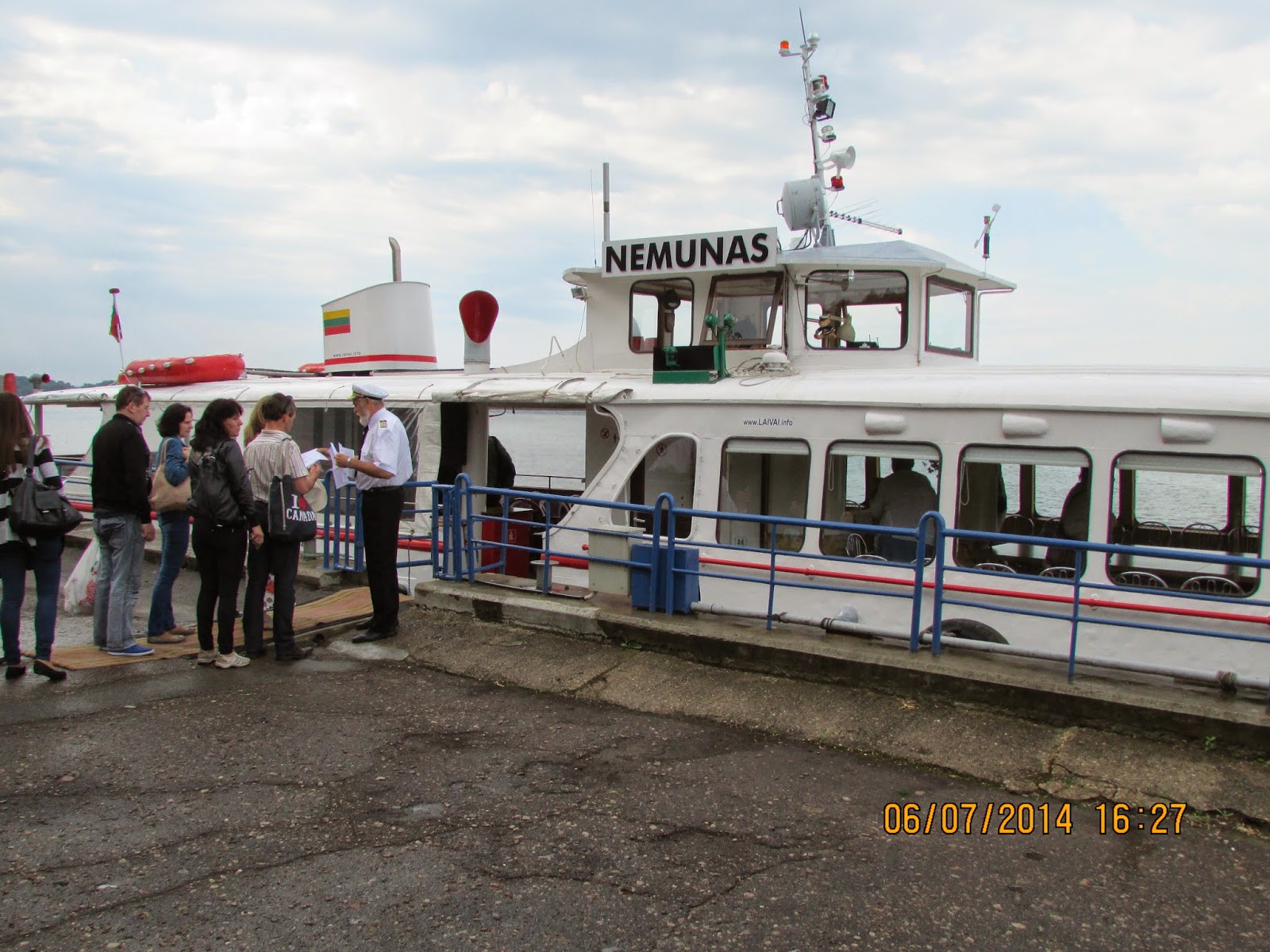 Teodora proved to be an expert on historic preservation issues and Rumšiškes specifically.  She also was excellent company (see photo of Jane and Teodora, below).  Aistė joined us a little while later (see photo of Aistė, Jane, and Ken, beneath that). 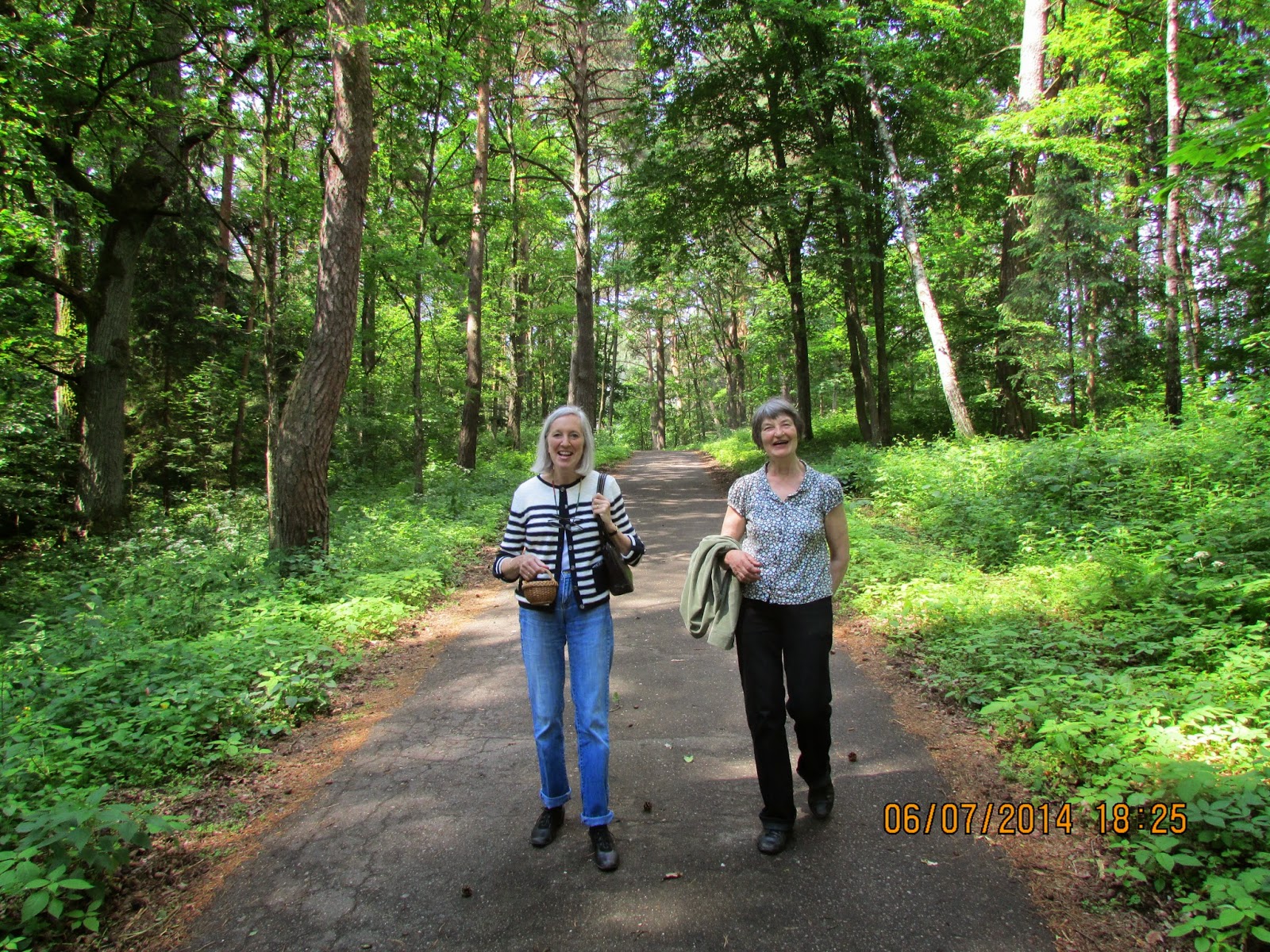 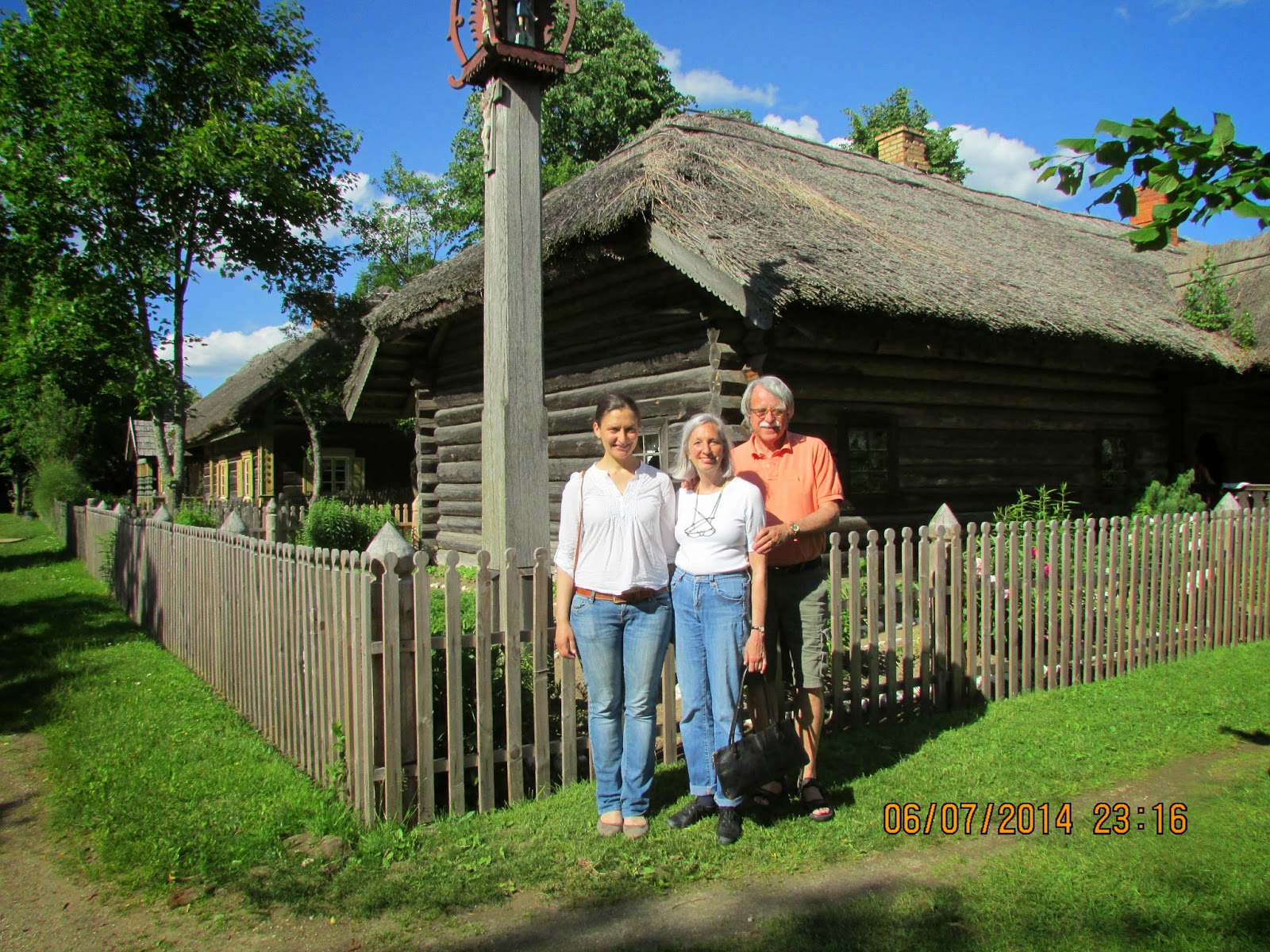 We had a fantastic visit, though what we saw constituted only a small fraction of the vast outdoor museum.  Toward the end of the tour, we arrived at the fictional village center (see photo below), that is supposed to represent nineteenth-century commercial activity and communal, or specifically urban, institutions.  That's Saint Florian, the patron saint of firefighters, on top of the column in the town square. 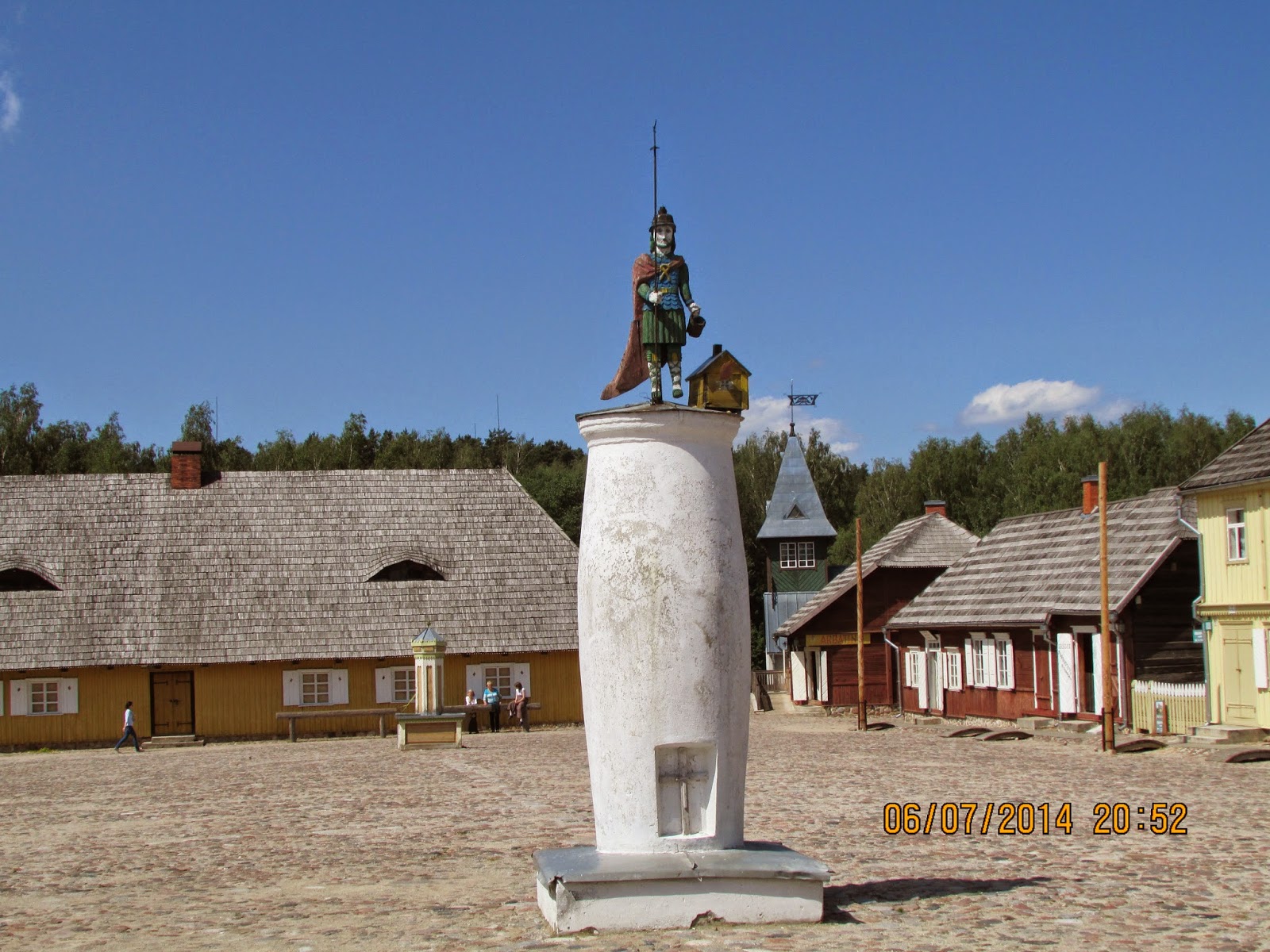 I think it is probably fair to say that as an ethnographic museum Rumšiškes may be a better expression of regional—and class—variations on the Lithuanian national theme than it is an expression of multicultural 19th-century realities.  As our “In Your Pocket” guide to the Kaunas area states, Rumšiškes has been criticized for failing to represent such nineteenth-century institutions as synagogues, Orthodox churches, and mosques.  In this way, the museum might exaggerate the monolithic quality of traditional Lithuanian culture and society.  Regional and socio-economic variations aside, not all Lithuanians were Roman Catholics, or even Christians.


One suspects that it was partly in response to that kind of criticism that Rumšiškes has introduced some exhibits designed to depict the tragedy of the post-World War II deportations that the Soviet Union used to strangle independent thought and indigenous aspects of Lithuanian culture.  Rumšiškes has recently unveiled a cattle car of the kind used to convey human cargo to remote outposts of the Gulag Archipelago.  There also is the kind of sod house that would have accommodated an appalling number of political prisoners in Siberia.  See photos below. 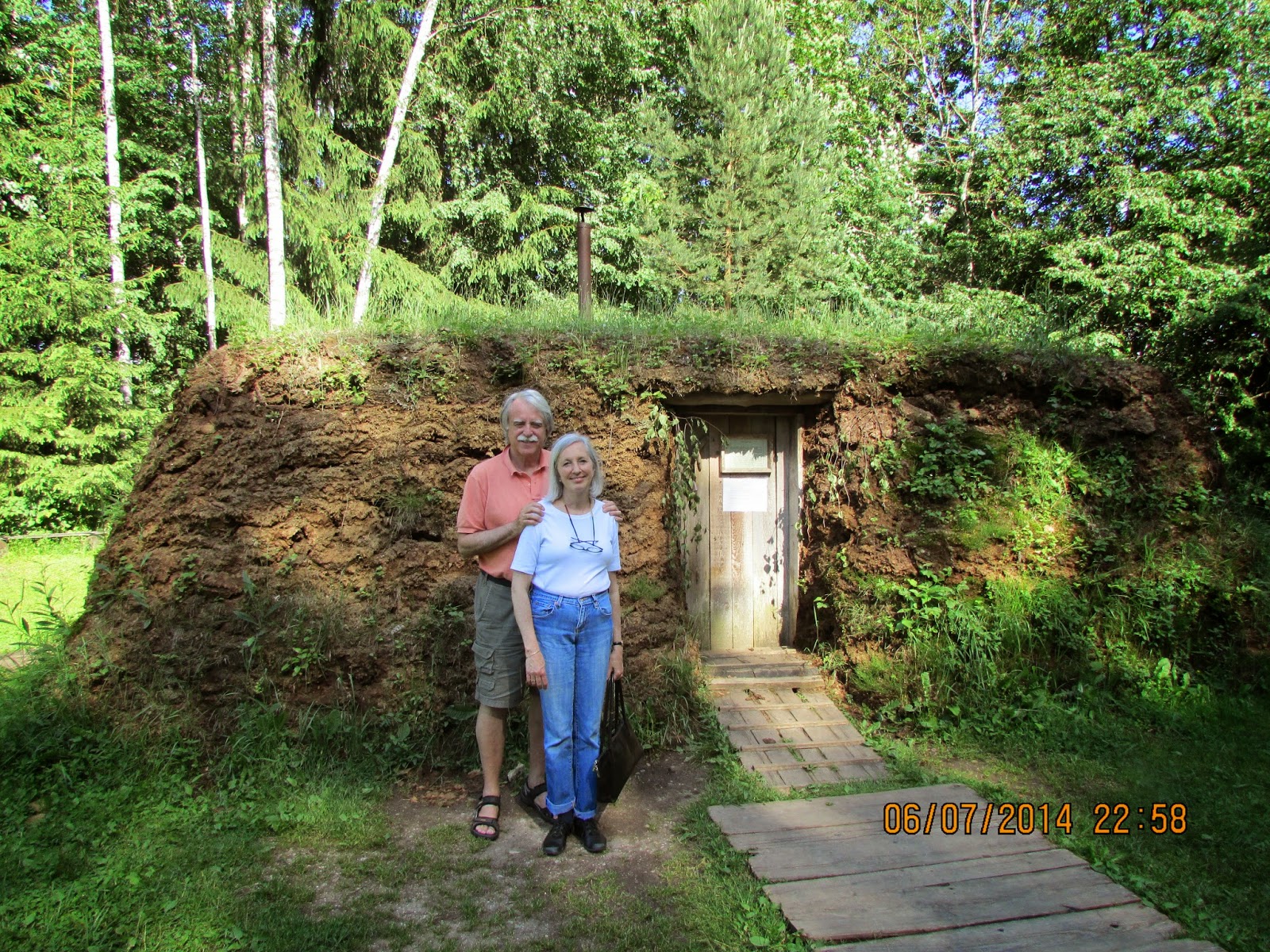 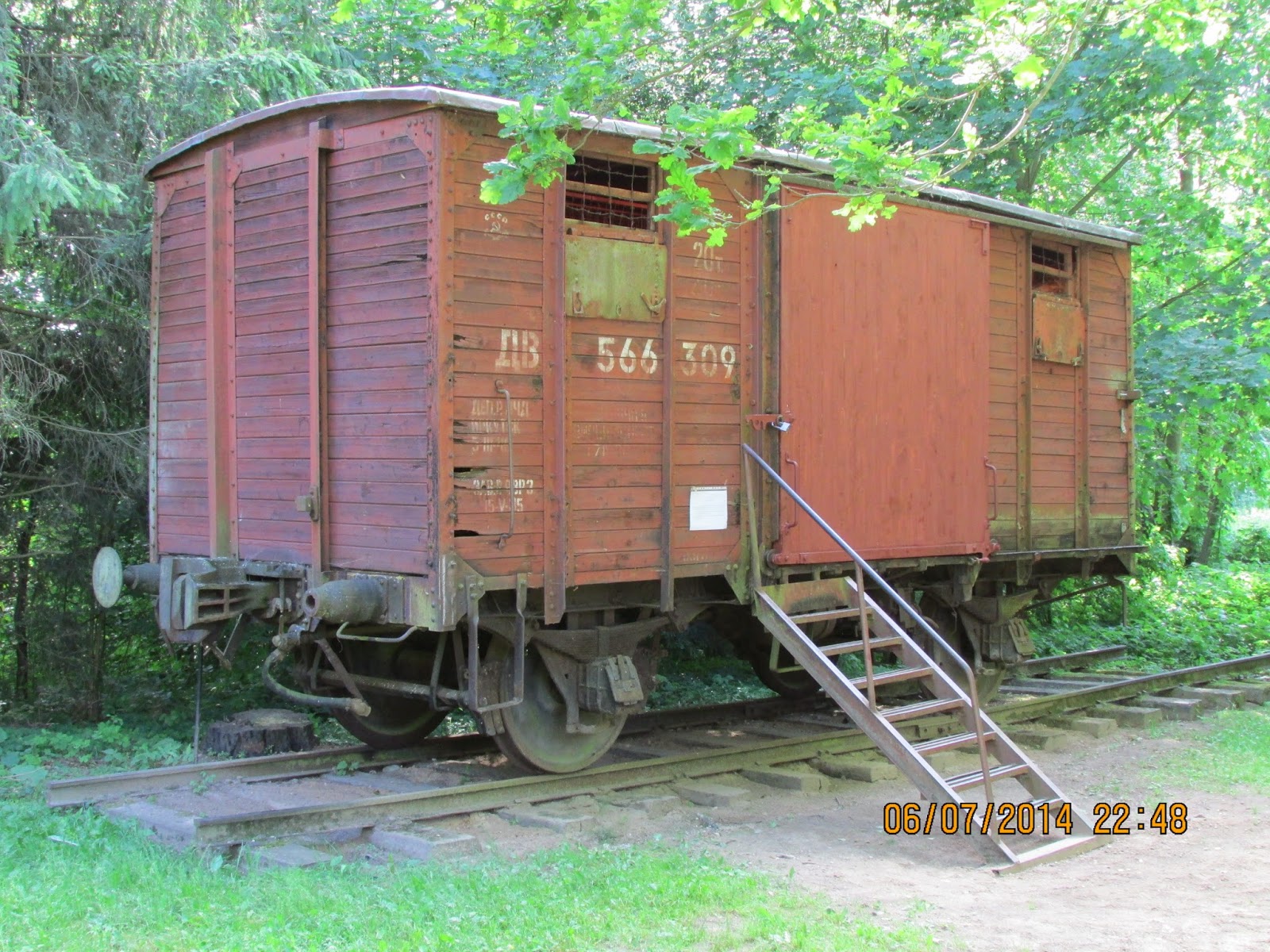 Of course, this glimpse into some of the horrors of the twentieth century, while profoundly moving, must be considered somewhat extra-curricular, since Rumšiškes is supposed to represent nineteenth-century Lithuanian life and culture.

Rumšiškes also has been criticized for failing to make official mention of the fact that a portion of the site was the scene of a massacre of men, women, and children during the Jewish Holocaust.  I suspect the museum would respond by saying that this too, is beside the point of an institution designed to impart an understanding of nineteenth-century Lithuanian life.

I would think that that line of argument would, however, make acquisition of a nineteenth-century Orthodox church, synagogue, or mosque an even more urgent priority.  Though I have yet to see a mosque, I have seen for myself that there are nineteenth-century synagogues and Orthodox churches in Lithuanian small towns and villages.  They need to be represented somewhere in Rumšiškes.