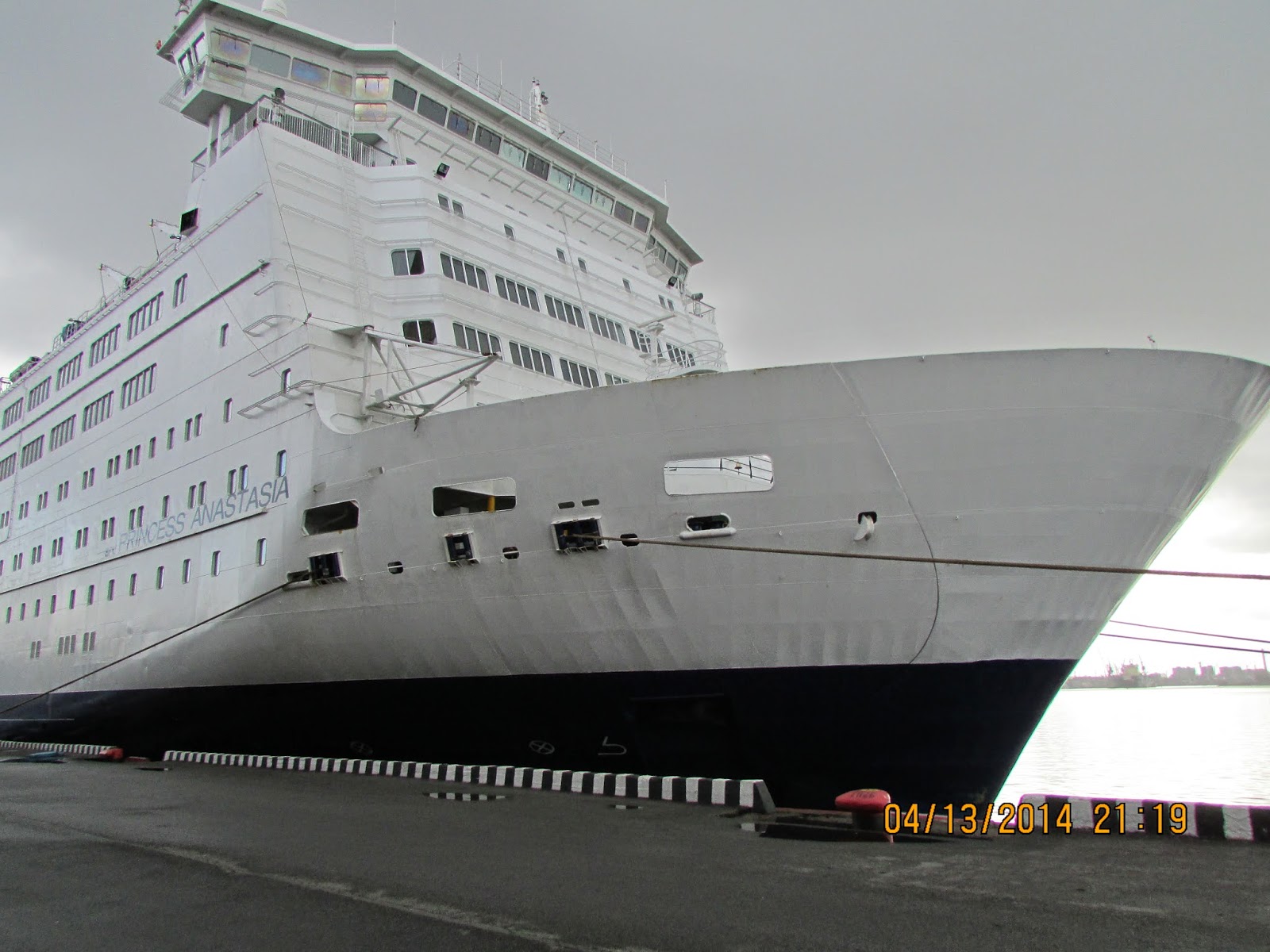 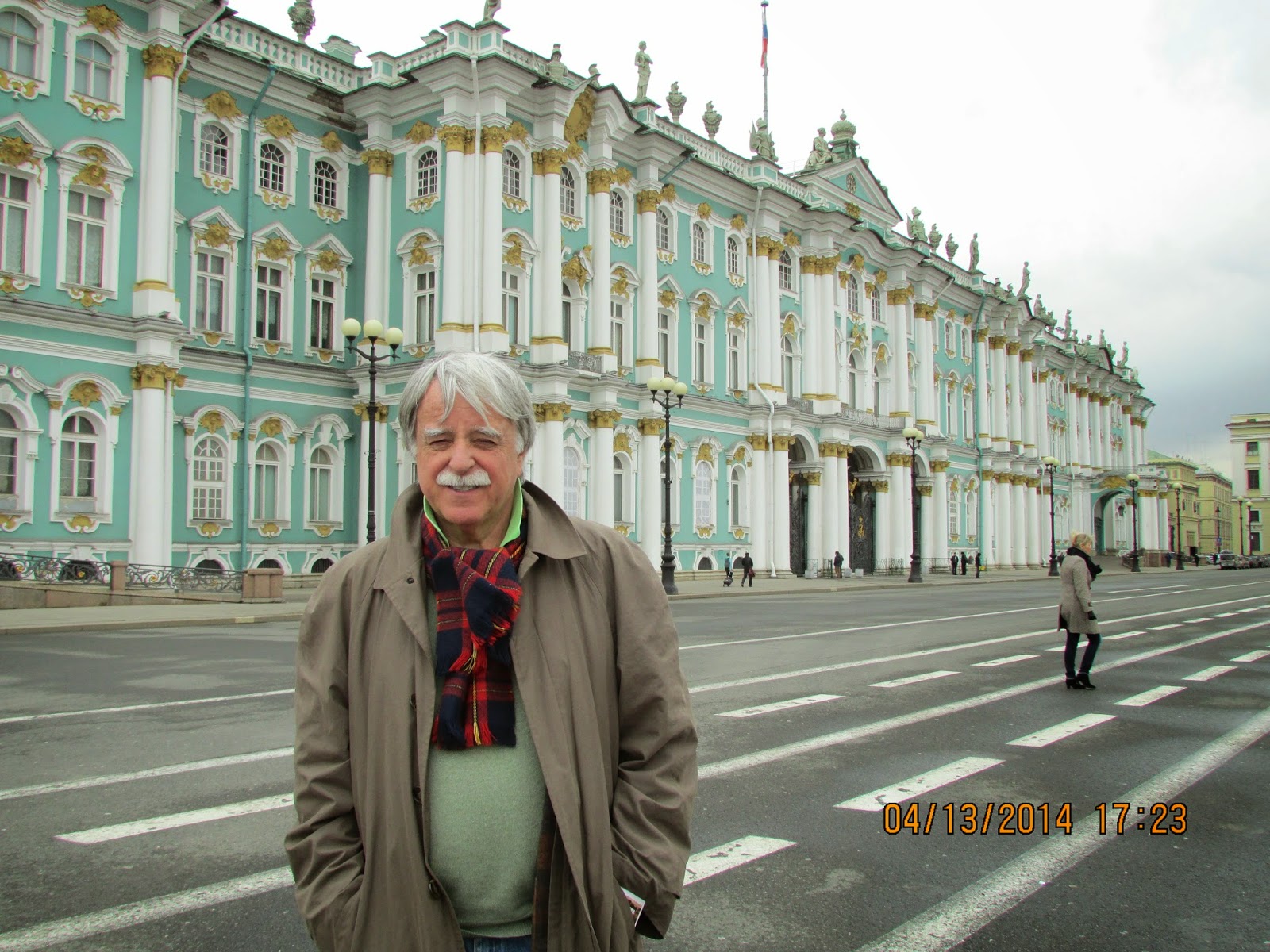 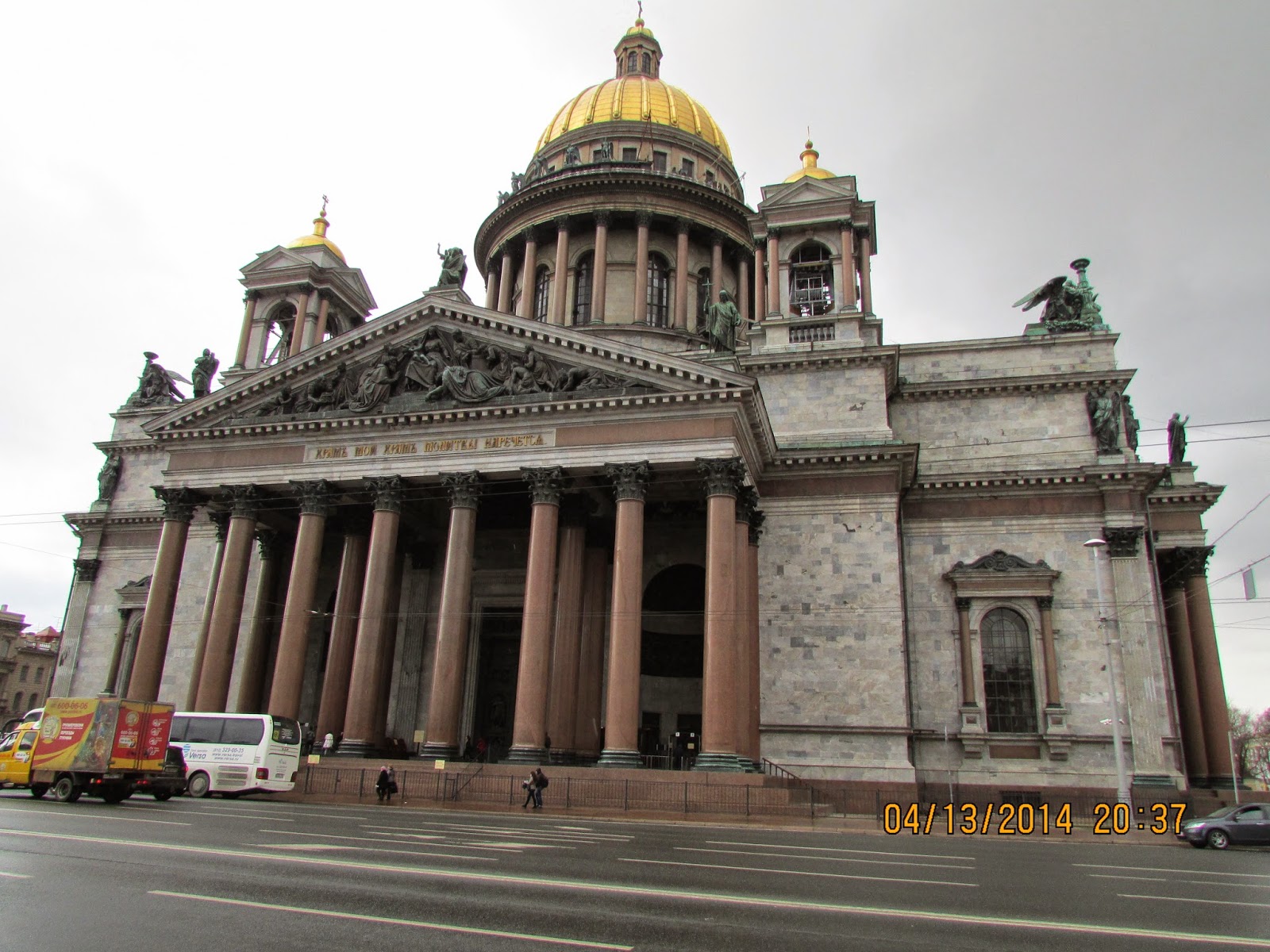 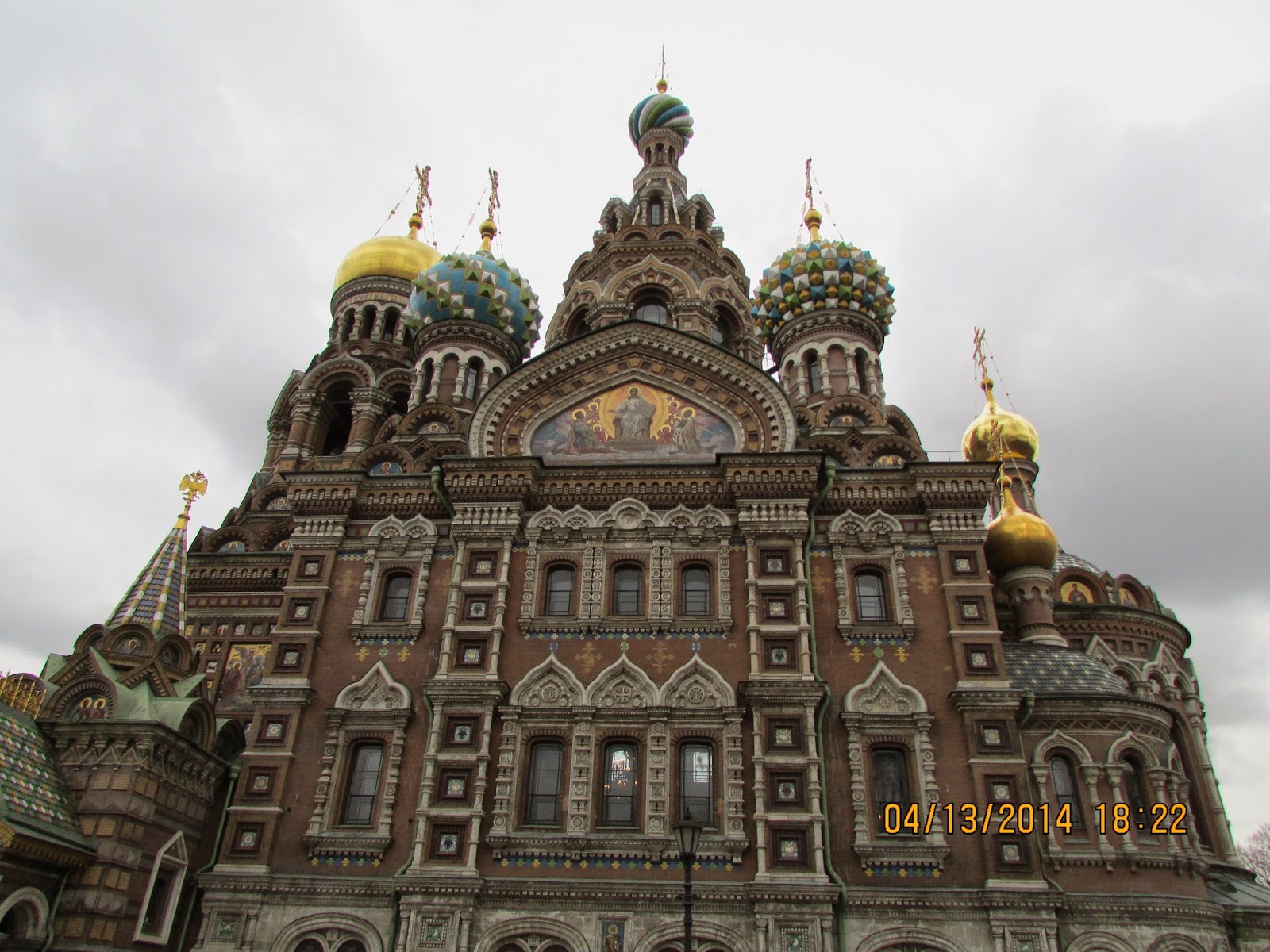 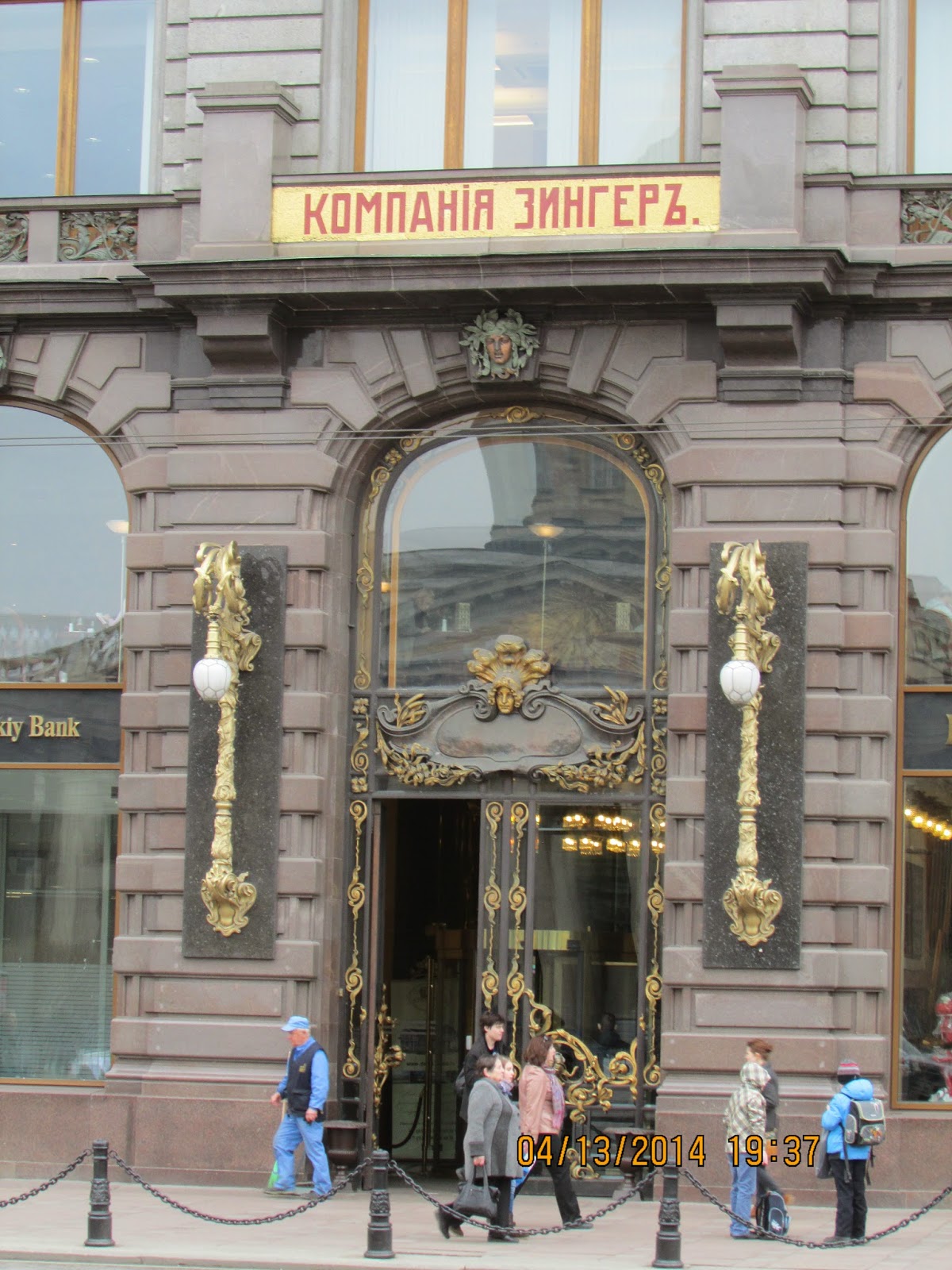 At about 3:45 last Sunday morning Jane and I headed off on foot to the Šiauliai bus station to catch a 5:15 bus bound for Riga, Latvia.  There we cooled our heels for an hour before boarding another bus to Tallinn, Estonia, then hopping in a taxi that took us to the docks.  Weeks earlier, we had booked a cabin in a ferry called the Princess Anastasia (see top photo), one of two ferries on the Baltic Sea operated by the St. Peter Line, a Russian company that has close enough ties to the Russian government to have been granted the exclusive right to bring non-visa-bearing tourists into St. Petersburg for a maximum of 72 hours.  We knew that our stay in Russia would be far shorter than that—only one day.


Our ship departed Tallinn on Sunday evening, crossed the Gulf of Finland overnight, and arrived in St. Petersburg on Monday morning.  The main purpose of our pilgrimage—it’s spring break at Šiauliai University—was to tour the Hermitage, one of the world’s great collections of visual art.


Trouble is, the Hermitage is closed on Mondays.  I like to think of myself as a pretty savvy travel planner, and this was an embarrassing rookie mistake; Jane and I were beyond disappointed.  We walked to the Hermitage, just to confirm that the doors would be bolted shut.  They were.  So we settled for a nice photo op (see photo #2, above).  Suddenly, we were in the market for a Plan B.


We set our sights on two churches filled with mosaics and other sacred images.  We went first to St. Isaac’s Cathedral (see photo #3, above).  The largest Russian Orthodox cathedral in Saint Petersburg, St. Isaac’s is full of paintings, sculptures, a few mosaics, and colored stonework.  From there we walked across town to a famous Russian Orthodox church called Savior on the Spilled Blood (see photo #4, above), which was built to commemorate Tsar Alexander II on the spot where he was assassinated in 1881.  Interestingly, both were billed as museums rather than houses of worship.


By noon we were getting pretty hungry.  We were in a quarter chock-a-block with fancy hotels, so we went into the nearest one, where the concierge directed us to an ATM in the lobby.  On our way out, Jane remarked that the hotel certainly had a beautiful lobby, prompting the doorman to sneer, “It’s almost enough to make you want to defect, isn’t it?"


Later, we were approached by a man who introduced himself, in excellent English, as a professor of history and a local tour guide; he said he had spent time in Washington, D.C.  After I explained that it was time for us to return to our ferry, he thanked us sardonically for meddling in the affairs of Ukraine, for it had brought all Russians together in a way that their own leaders could never have done.  Noting that Russians celebrated the reunification of Germany, he wondered why the U.S. could not enjoy seeing Mother Russia recover her prodigal sons.  I told him I was inclined to concede his point about U.S. double standards (I was thinking of the Monroe Doctrine), but I suggested that plenty of people in Ukraine might see the massing of Russian troops along its eastern border as something other than a happy homecoming welcome for the wayward Crimean child.  How widespread, we wonder, is this man’s view of the way that Vladimir Putin snatched Crimea away from Ukraine?


On our way back to the Princess Anastasia, we stopped by the Café Singer (see photo #5) for a very pleasant lunch in a gorgeous art nouveau building that reminded us of our quick trip to Riga a few weeks ago.


Back on the ferry, we departed on schedule—it was still bright and sunny—for our overnight voyage to Helsinki.  As St. Petersburg receded in the east, we encountered some precipitation, during which we were treated to the most spectacular rainbow that either of us had ever seen.  Pretty soon passengers, crew, maids, and kitchen staff were pressing themselves against the windows to witness a vivid display that lasted at least fifteen minutes.  It seemed an appropriate way of punctuating the end of our curious journey to the Land of Oz; we continue to wonder what to make of its enigmatic Wizard.
Posted by Kenneth Kolson at 8:16 AM