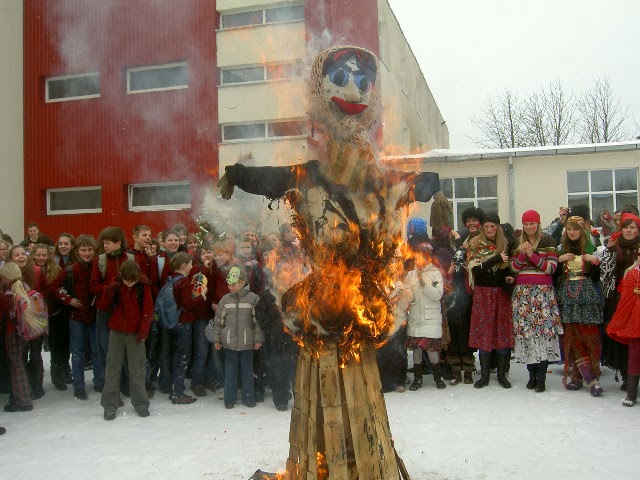 As a Latter Day Sinner, it’s been hard enough for me to figure out what Episcopalianism is all about, let alone Roman Catholicism.  Yesterday my Lithuanian language and culture teacher introduced us to the holiday known here as Užgavėnės, and I’ve been wrestling with the concept ever since.


Užgavėnės apparently is something like Mardi Gras, which for me conjures up images of beads and bangles on Bourbon Street, or maybe Carnival in Rio de Janeiro.  I think of it as a pre-Lenten throw-down, one that takes place on Shrove Tuesday, or what in some countries is known as Fat Tuesday, a binge that ends the following day—Ash Wednesday—the beginning of a long period of Lenten self-denial leading up to Holy Week.


Lithuania is a Roman Catholic country, and yet this land, the Hill of Crosses to the contrary notwithstanding, is not all that well established as a bastion of Christendom, so its holidays often combine sacred with pre-Christian, or profane, traditions.  Here is the Wikipedia entry for Užgavėnės:


Užgavėnės is a Lithuanian festival that takes place during the seventh week before Easter (Ash Wednesday). Its name in English means "the time before Lent.” The celebration corresponds to Roman Catholic holiday traditions in other parts of the world, such as Mardi Gras, Shrove Tuesday, and Carnaval.


Užgavėnės begins on the night before Ash Wednesday, when an effigy of winter (usually named Morė) is burnt. A major element of the holiday, meant to symbolize the defeat of winter in the Northern Hemisphere, is a staged battle between Lašininis ("porky") personifying winter and Kanapinis ("hempen man") personifying spring. Devils, witches, goats, the grim reaper, gypsies, and other joyful and frightening characters appear in costumes during the celebrations. The participants and masqueraders dance and eat the traditional dish of the holiday—pancakes with a variety of toppings, since round pancakes are a symbol of the returning sun.

One nice thing about Užgavėnės is that there’s never any doubt about the outcome; unlike Groundhog Day, Užgavėnės doesn't really give winter a fighting chance.