Our Woman in Vilnius 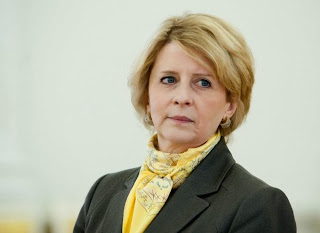 A few weeks ago, I had the pleasure of meeting the U.S. Ambassador to Lithuania, Deborah Ann McCarthy.  Ms. McCarthy is a career foreign service officer.  She has served in Athens, Managua, Paris, Rome, Montreal, and Port au Prince, among other places.  She was educated at the University of Virginia and Georgetown University, where she earned two Masters degrees.  Like her counterpart, Žygimantas Pavilionis, the Lithuanian ambassador to the United States, she speaks five languages.

I heard Ambassador McCarthy speak at a symposium sponsored by the Women's Foreign Policy Group. In the WFPG newsletter, it was said that the Ambassador "spoke about the US and the Baltics, with a focus on energy, Russia, and NATO.  In her remarks, McCarthy discussed the importance of the current Lithuanian presidency of the European Union, as well as the increased tensions between the EU and Russia over the Eastern Partnership, which has further strained Russian-Baltic relations."